The Eagle Rare 10yo produced by Buffalo Trace Distillery is probably the most accessible age-statement bourbon available in the UK. It’s matured in charred American white oak barrels and bottled at a very reasonable 45%. I got my bottle from Amazon but it’s also available from Waitrose supermarket and various online stores.

Jim Murray scores the Eagle Rare 10yo 89/100 in his Whisky Bible, which classifies it as “very good to excellent whiskey definitely worth buying”. His review was added in 2012 so it’s a bit out of date but other reviews suggest standards have remained high. Mr Murray says of the taste “early oils as expected, then a surprising change of gear towards a rye-Demerara mix which firms and then moves towards a much spicier, kumquat inclined middle than the nose suggests”. He summarises with “a surprising trip this with some dramatic changes en route”.

Scoring over 83/100 on Whiskybase is a very good score especially from over 100 votes. On Amazon this bourbon racks up an excellent 4.8/5 from 77 reviews. Comments online include “a wonderful, sweet and very quaffable bourbon”, “with some air, this bourbon reveals some if its inner qualities, namely the floral fragrance on top of its usual virgin oak blasts”, “one of the nicest bottles of bourbon I’ve ever drunk” and “so smooth and full of flavour”.

The first book I got about whisky was Ian Buxton’s “101 Whiskies to Try Before You Die”. In it he mentions Mellow Corn, a simple and cheap corn-based whiskey from America. The reason it’s taken me so long to get a sample is because even Ian Buxton thinks it’s poor whiskey. He says it’s worth trying “if only to understand the beneficial influences of malted barley and ageing”. It’s also an example of America’s whiskey history – before bourbon there was straight corn whiskey, a form of moonshine deeply routed in American tradition. So you can see how Mellow Corn lends itself perfectly to Ian Buxton’s book.

Nearly 70/100 on Whiskybase isn’t a good score with comments ranging from “God awful. Just God awful.” to “I like this one. It’s not sophisticated. In fact, the alcohol bites you in both the nose and the mouth. There’s hardly any finish, but hey, it’s perfect for watching old episodes of the Dukes of Hazzard. American muscle cars, Daisy Duke and corn whiskey sort of belong together, and that’s what makes this one special for me.”

Scoring 83/100 in the Whisky Bible classifies this corn experience as ‘good whiskey worth trying’. The author, Jim Murray, says “dull and oily on the nose, though the pallet compensates with a scintillating array of sweet and spicy notes.”

Nose: Waxy (it should be), with light floral notes and vanilla
Taste: Surprisingly complex, with mouth-coating oiliness, some fruit and toffee
Finish: Quite lively; the fruit, wood and caramel notes hang on in there

Here’s Big Red Liquors with his review on You Tube (August 2014):

With my collector’s hat on, I do like bottles with wax seals! I have this uneducated idea that they’re difficult to fake, unless you’re a pirate from the 16th century, or related to Captain Jack Sparrow. Not that it really matters because this bottle of bourbon by Jim Beam only set me back £16.33 in a Tesco half-price sale. It’s hardly a collector’s item where experts will be carbon dating the wax when I sell it in 2036.

So why Knob Creek? Because I first stumbled across it in the book ‘101 Whiskies To Try Before You Die’ by Ian Buxton. Unfortunately he was talking about the 9-year-old but this NAS (non-aged statement) is as close as I’m bothering to get. Both are 50% bourbon so that’s near enough for me! Ian Buxton says about the name “mildly titillating for UK drinkers in a smutty sort of way”. Oow-er-madam! I will be getting out my box set of Carry On movies when I crack this bottle open and reshaping the seal into an erotic candle! That’s my Saturday night arranged.

A new bourbon to add to my collection for £20 from Tesco?! Oh, go on, if I must! I’d heard of the Angel’s Share but the Devil’s Cut was new to me. This is the spirit that gets absorbed into the cask. I can imagine that would have quite an intense, concentrated flavour. Jim Beam manage to extract it with a process of steaming/sweating. However it’s done it can’t be too laborious or the whisky would be over £100 per bottle!

Although 76/100 on Whiskybase is a fairly hmmm score the experienced whisky reviewer Mark Dermul gives the Devil’s Cut a healthy 82/100 with a closing remark of “it is indeed significantly better than the standard Jim Beam bourbon, available for around 30 EUR, which is fair. Goes down very well in a tumbler with a cube of ice. Oh, blasphemy!” I wouldn’t worry Mark because I tend to have cheap bourbon with coke – shocking!

I’ve added an excellent video review below by Jo of Whisky Wednesday on You Tube, which gives some background about the creation process and insight into the taste experience for this interesting bourbon:

This version of Jack Daniels was a new addition to the Whisky Bible in 2015. The bible author, Jim Murray, gives it an excellent 90.5/100 which classifies it as “brilliant” which is the same banding as the 92/100 he gives the classic Jack Daniels No.7. The members on Whiskybase are less enamoured with the No.7, which they score 65.77/100 from 309 member votes. Personally I liked it but only after giving it 10 minutes to allow the smell of glue to dissipate. But 83/100 on Whiskybase is a very good score for the No.1.

Jim Murray’s tasting notes for the Jack Daniels No.1 are:

Nose: wonderful dose of extra tangy kumquat over the normal JD signature; something of the fruity cough sweet about this one.
Taste: a massive, pleasantly oiled mix of molassed fudge and liquorice.
Finish: drier, toastier hickory.
Overall balance and complexity: no mistaking the JD pedigree. Just a few telling extra degrees of fruit.

Here’s Whisky Wednesday with their review and score of 7/10 on You Tube (December 2016): 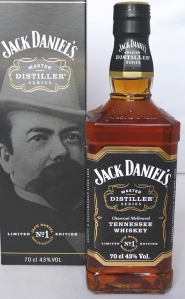 I had to go back to the Whisky Bible 2014 for a review as this bottle of Ancient Age is missing in the 2015 edition. It looks like this 45% bourbon has been replaced by a 40% version which Jim Murray, the bible author, only scores 74.5/100 with the comment “basic: no frills and certainly no thrills”. I’m glad I have the older, better version! Although, in the Whisky Bible 2015 there are 3 versions of ‘Ancient Age’ all of which score over 90/100! Clearly Mr Murray likes where the distillery is going with its brewing.

My bottle of Ancient Age gets the bible remark of “a quite beautiful tapestry of lively spice and rich, sweetened tannins arrive from the first moment…and last most of the course. More than just a passing nod to this distillery’s glory.” And 86.5/100 classifies this bourbon as “very good to excellent whisky definitely worth buying”.

The Whisky Bible 2015 doesn’t have much to say about this standard version of Buffalo Trace, which is hardly surprising given the 6 pages dedicated to all the other distillery releases. For the author, Jim Murray, to try so many variations of Buffalo Trace, he obviously thinks this bourbon is a worthwhile sipper. 92.5/100 classifies this whiskey as “brilliant!” with a comment of “easily one of the lightest BTs I have tasted in a very long while”.

Nearly 82/100 on Whiskybase is an excellent mark when you consider this bourbon can be found in the UK for less than £20 (even cheaper elsewhere in Europe). Reviews include comments of “standard, but a quality bourbon. Nose itself deserves very high marks”, “overall very smooth. The hits of vanilla and caramel go together with the nuttiness of the finish” and “highly recommend for most bourbon cocktails. Very versatile.”

If you’re a Jack Daniels drinker that wants to try something different, or never tried bourbon before, then Buffalo Trace is certainly worth getting hold of.

Having not tried Bulleit before, Morrisons’s tempting offer of £22 suckered me in. As low as that might seem, the same bottle is selling in Holland for €21.60 (£17), so it’s hardly the bargain of the year. Nevertheless it’s a new bourbon to my growing American collection.

There was a 40% version of the ‘Frontier Whiskey’ but this is the stronger 45%. Not that ‘stronger’ always means better. The Whiskybase members have the 40% version scoring 80.63/100 and my 45% bottle languishing behind with less than 79.5/100. But hardly much of a difference to notice. Comments include “great nose, and ok mouth and a poor finish” and “pleasant enough dram – quite a short, stocky after taste leaving the tongue with a pleasant coating”.

The Whisky Bible 2014 has less to say about this whiskey than the 2013 edition, then in 2015 the whiskey has vanished, suggesting it’s been discontinued. I’ll be surprised if it has! Jim Murray summaries his review in the Bible with “a very easy going bourbon which makes the most of any rye in the recipe. Dangerously drinkable.”

Here are the Scotch Test Dummies with their YouTube review (Dec 2015) where they rather enjoy the Bulleit ‘Frontier Whisky’ (86/100):

One annoying thing about buying a whisky miniature is, you often don’t get all the information found on a bigger bottle. Take for example this ‘Single Barrel’ by Jack Daniels. There are 5 different versions reviewed in the Whisky Bible 2014, each with different cask numbers. This information would be written on a 70cl bottle but it’s missing on a 5cl. Hardly surprising given the shortage of space. And it’s my fault for being such a cheapskate and not spending £45 on a bigger bottle!

The good news is, of the 5 versions of the Single Barrel in the Whisky Bible, the lowest scores 86/100 and the highest 93.5/100. In other words, according to the author, there’s no such thing as a bad version of this bourbon. This is backed-up by the different versions of the Single Barrel reviewed on Whiskybase, all with scores in the 80s. Whichever barrel my miniature came from, it should be good. 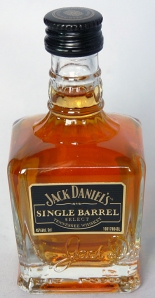 When Paula Abdul was a judge on American Idol, if she couldn’t think of anything nice to say about a contestant’s voice she had a fallback statement of “nice shoes!” Gentleman Jack, I can honestly say, nice bottle! As for the contents, the Whisky Bible isn’t very complimentary, saying “a whiskey that wilfully refuses to say anything particularly interesting, or go anywhere”. At the same time the Whisky Bible gives the Jack Daniels No.7 an excellent 92/100. Compare and contrast, we have Ralfy saying that Gentleman Jack is better than the No.7 in his opinion, with more complexity. Whose right?! Who knows! Ralfy certainly considers this bourbon worthy of a review, so he clearly likes it.

Although some supermarkets regularly reduce the Gentleman Jack to the low £20s, I decided to get a miniature to give this bourbon baby a try before committing to anything larger. The average score of 73.8/100 on Whiskybase from 82 members is very low, which isn’t filling me with a lot of confidence. It sounds like the “nice shoes” I need are a pair of trainers, so I can run as far away from the Gentleman Jack as possible! But I enjoyed the No.7 so I’ll spare my judgement until after the tasting. 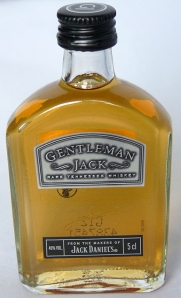