I do love a 1000ml bottle of whisky, especially if it contains good uisce beatha. You’ll often read online that Travel Retail used to do more 1 litre bottles but there are still some to be had and new ones being introduced. The ‘Eirigh Na Greine’ (meaning ‘Morning Sky’) by Bunnahabhain first appeared in airports in 2014 as a ‘limited edition’ and has only ever been available as 1 litre. The distillery say it’s been exclusively matured in French red wine casks, which makes it interesting. Just to be awkward Master of Malt say “a portion of this single malt was matured in red wine casks” and Whiskybase says “Italian & French red wine casks”. Confused? Personally I’ll stick with what Bunnahabhain say as they make the stuff.

Nearly 82/100 on Whiskybase is a very respectable mark, although the standard 12yo scores over 85/100. You get the impression that Bunnahabhain fans don’t like the distillery profile being messed around with. Comments online include “very well balanced, beautiful presence”, “lovely rich and complex nose, wine-cask dominated palate and a pleasant finish”, “smooth as silk” and “if you like Bunnahabhain, this one is a must try to take your senses to new places and evolve your knowledge of this fine distillery”.

What Master of Malt have to say:

Here’s Horst Luening of Whisky.com with his thoughts about the ‘Eirigh Na Greine’ on YouTube (August 2015):

In 2017 Bunnahabhain decided it was time to update their packaging. Waitrose reduced the new 12yo to under £30 (as they often do) so I picked up a bottle. Not that I took much convincing because this is one of my favourite single malts regardless of price. Bunnahabhain clearly know what the market wants and the 12yo ticks all the boxes with good potency (46.3%), no chill filtration, natural colour, bags of flavour, great value (even at full price) and an age statement!

The use of the new term ‘Small Batch Distilled’ on the packaging got me wondering if the 12yo had changed in flavour but apparently it’s the same old 12yo inside the bottle. The use of ‘Small Batch’ is a vague term that stems from American whiskey production. Perhaps Bunnahabhain got the idea from their Islay neighbour Bowmore who released a NAS (non-age statement) in 2014 called ‘Small Batch’. It refers to small-scale production but there is no requirement to define what ‘small’ actually means. Small compared to what? In fact it’s so meaningless I’ve wasted too many words on it already! 🙂 Moving on….

One thing that’s clear from online reviews is that Bunna fans love this new release, even if it’s just the packaging that’s changed (although there will be subtle differences from batch to batch). Scoring nearly 86/100 on Whiskybase is a fantastic score with previous years tending to score in the range of 84-85/100. Comments online include “nice all man’s friend that is dangerously quaffable”, “fantastic complex whisky that compares with the very best”, “this is a wonderful whisky, rich sherry, oak, salty notes, and light hints of cherry” and “the best 12yr aged malt on the market”.

Tasting notes from ‘Master of Malt’:

Here is Horst and Ben Luening with their thoughts about the new Bunna 12yo on YouTube (Jan 2018): 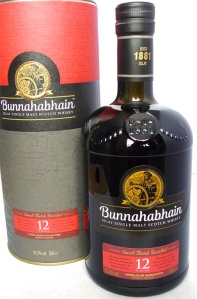 I wrote on my blog last year about a miniature bottle I got of this Deanston 12yo. I still haven’t drunk it but I eventually tried the Deanston 12yo for the first time in a pub this year. Jim Murray, in his Whisky Bible, thinks the nose is out of sync and the finish is “full of bitter and undesirable elements”. But I didn’t detect that at all. Admittedly, I’m not one that spends much time nosing my whisky. Generally I’m too keen to get at it!

As for Jim’s criticism of the finish, I wonder if our opinions differ because I added water and he didn’t?! At the start of the Whisky Bible, Jim says “don’t add water! It releases aromas but can mean the whisky falls below 40% so it is no longer whisky.” It’s a fair point but, if the strength doesn’t agree with your palate, then water is your friend. Ralfy adds a drop of water, and at 46.3% the Deanston can take a bit of diluting and still remain at 40% or above. Perhaps that extra water smoothed out the finish that Jim complains about because I didn’t taste it. My view is it’s worth experimenting with water for your own tastes. It’s not as if the Scotch Whisky Association are standing over your shoulder ready to shout “THAT’S NOT WHISKY!!!” just because it dips below 40%. Come on Jim! Lighten up and have another dram!

When I bought a miniature of the Bunnahabhain 12yo last year, I wasn’t up to speed with my Bunnahabhain history. What I’d managed to acquire without knowing was a pre-summer 2010 version of the 12yo, bottled at 40%. In March this year Waitrose had a good offer on a full 70cl bottle and I decided to upgrade my miniature. A bit of research and I discovered this was a new version first released in the summer of 2010. Being 46.3%, no added colour and non-chill filtered, I can see why Ralfy gives it a massive 91/100.

As impressed as Ralfy is, Jim Murray (author of the Whisky Bible) is less so. He scored the old 12yo version 84.5/100 and only gives this new version 1 point more. Why, because apparently there was an even better version of the 12yo before (in his opinion), so any new 12yo has a lot to prove. Nevertheless, Jim is very complimentary about this new version saying “lovers of Cadbury’s Fruit and Nut will adore this” and “some outstanding moments”.

Ralfy says in his review (from 2010) that Bunnahabhain is the least peated of the Islay whiskies, and therefore tends to be overlooked. Since I’m a Speyside fan I’ve got a feeling I’m going to really enjoy this 12yo! I’ll have to get some Cadbury’s Fruit and Nut to go with it! 🙂 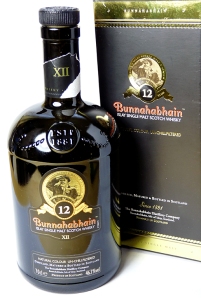 There I was, minding my own business and not thinking about Tobermory whisky, when Morrisons supermarket reduced it to a tempting price. I still have the miniature 10yo I posted about on my blog last year! I haven’t tasted it but at 46.3% alcohol, non-chill filtered, and getting good reviews, why not have the full 70cl?! I didn’t take much convincing to buy it. I can now split the miniature with my brother during a tasting session in the knowledge I have plenty more where that came from!

The rating for the Tobermory 10yo hasn’t changed from 2013 to 2014 in the Whisky Bible, remaining at an excellent 85/100 which is “very good to excellent whisky definitely worth buying”. I’ve included the Malt Maniacs rating which, at 79/100, is also a very good mark.

I’d been hoping to get a full bottle of Deanston 12yo from Marks & Spencer but it seems the distillery no longer supplies the famous store with a version of their 12yo. The Whisky Bible gives the M&S bottling 84.5/100, so the author clearly feels this is different, and better whisky to the standard 12yo.

Just when I thought I’d have to slum it with the regular 12yo that only gets 75/100 I discover different drinkers have different opinions! Wow, now there’s a shocker! 🙂 5 reviewers on Malt Maniacs give this 12yo an average mark of 83/100 and then Ralfy gives it an excellent 88/100. Knowing how much Ralfy likes whisky at 46%+ and non-chill filtered, the Deanston 12yo has some qualities he loves before he’s even tasted it. If I enjoy this miniature I’ll definitely be after a full 70cl!