Amrut Distillery first launched their single malt onto the world stage in Glasgow in 2004. This appears to have been a 40%, NAS (non-aged statement) bottling which scored 82/100 in early versions of Jim Murray’s Whisky Bible. If you’ve tried recent expressions of Amrut and are interested in how the single malt started, grabbing an early bottle at auction is your best chance. Watch out for it being 40% (they changed to 46%+ very quickly) and like the picture below.

Even though my bottle is a miniature it has the bottling date of 27/03/06 printed on it and ‘B.No-05’ which I’m assuming is the batch number. Until 2008 the Whisky Bible included a review of the bottling from 25/02/04 then in 2009 it changed to 26/06/07 for ‘B.No-06’. As this is so close to my version I decided to include the rating of 89/100. Jim Murray says of the taste “brilliant arrival with the oak and barley in tandem; both take turns at supremacy while the body feel excels with gentle oils constantly caressing, while balancing spices playfully nip”. He summarises with “as 40% abv malts go – from any country – this is pretty spot on.”

Here’s ‘Dram a Day’ giving us his thoughts on You Tube about this older-style Amrut miniature (Feb 2016): 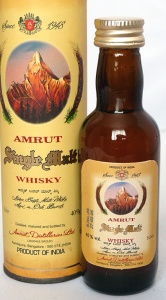 Whisky from India shouldn’t be a surprise in 2015, especially as the Amrut distillery was founded in 1948. The word ‘Amrut’ means a golden pot containing the Elixir of life. And ‘Fusion’ refers to a combination of Indian barley and Scottish peat thrust together to form a single malt with a hefty 50% abv. At least that’s what it says in the book ‘101 Whiskies to Try Before You Die’ where I first encountered the Amrut Fusion. On the bottle’s tube it says “Indian and Scottish barleys” and makes no mention of “peat”. Perhaps the recipe has changed?

The Whisky Bible 2015 only lists two releases of the Fusion – Batch 1 (released in 2009), which scores the acclaimed 97/100 and Batch 10 (released in 2011), which scores a very healthy 94.5/100. I hope that standards have been kept up because my bottle is Batch 27, released in August 2014. But who knows because Jim Murray, author of the Whisky Bible, says Batch 10 should be “plotted on a different map to the now legendary Whisky Bible award-winning Batch 1”. If batches can be so different it makes a mockery having the 97/100 mark for Batch 1 on the tube of Batch 27 produced 5 years later. It’s not the same whisky! But it’s an award so Amrut naturally want to shout about it. Batch 27 scores over 84/100 on Whiskybase, which does suggest it’s an excellent single malt.

Here’s Ralfy with his thoughts about the Amrut Fusion on YouTube (Oct 2011):