On the back of the box containing my 3 Clontarf miniatures is says of this Classic Blend “A Single Malt with a sophisticated rich malt taste, full of texture yet astonishingly smooth and lingering.” Single Malt? Perhaps if it’s a blend of single malts from the same distillery, then it’s still a single malt, but why is it called a blend?! They’ve confused me, even though I know it’s a blend. Perhaps the terminology can be more vague in Ireland. Try selling a blend as ‘single malt’ in Scotland and you’d feel the wrath of the law! The rest of the text on the box says “Nose: Toffee and subtle oak. Taste: Smooth and velvety with hints of vanilla”.

It all sounds very nice, albeit somewhat confused about its identity. Scoring 81/100 in the Whisky Bible might not sound amazing but it still falls into the category of “good whisky worth trying”. Jim Murray, the Bible author, says in his review “a hard as nails blend only softened by the heavy use of caramel which, though chewy, tends to obliterate any complexity from elsewhere. Ouch!” Nevertheless, he scores the ‘taste’ element as 22/25, so effectively 88/100. If you put a peg on your nose and ignore the finish, you’ll enjoy a top-class dram! 🙂

Having bought this blend as part of a triple set of Clontarf miniatures, I’m certainly glad I didn’t get it as a full bottle! Although finding a review has proved tricky, the general consensus seems to be that this Irish blend isn’t very good (average at best). I’ve found information about a ‘Gold Label Reserve’ which could be the predecessor of this version minus the “1014” on the label.

The distillery say of this whiskey “a mouthwatering blend of Single Malt and rich grain whiskies. Uniquely fresh, smooth and spicy.” They then go on to describe the nose as “malt and spice” and the taste as “mouthwateringly fresh, smooth with a malty complexity.” Not exactly a deep analysis but then it seems from the lack of reviews that there’s not much more to say about this blend. I’m just praying I don’t end up holding my nose and throwing it back to finish it off! 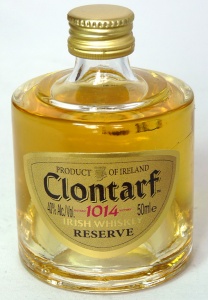