The ‘Deveron’ is a re-launch of the old ‘Glen Deveron’, a brand name by the Macduff distillery. Towards the end of 2014 John Dewar & Sons Ltd decided to repackage 5 of their distillery brands under the title of ‘Last Great Malts’, which were Aberfeldy, Aultmore, Craigellachie, Royal Brackla and The Deveron. You can watch their You Tube promotional video here.

Personally I quite liked the old Aberfeldy packaging but the ‘Glen Deveron’ desperately needed to be brought into the 21st century. The new frosted bottle has plenty of style but is the whisky inside any good? The old Glen Deveron 10yo that this new 12yo replaces scores 73.7/100 on Whiskybase from 70 votes compared to nearly 81/100 for the 12yo. It seems it’s not just the packaging that’s improved. The Deveron has become a tasting contender and could well tempt people to part with £35.

Here’s ‘Scotch Test Dummies’ with their review on You Tube (February 2016): 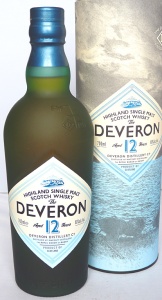 I’m always delighted to find a new source for whisky. Morrison & Mackay (M&M) started business in 2014 and are home to the Carn Mor collection (formerly produced by the Scottish Liqueur Company of which the Morrison and Mackay families were stakeholders, I believe). My eyes lit up when I saw they had 20cl bottles from the Carn Mor Vintage Collection, a set of 24 years covered by 24 whiskies (and subsequent replacements when certain years ran out). They’d been released for several years before I started collecting whisky in 2013 so I was a bit late to the party. I got 16 of the 24 before sources ran out. I acquired my last example in June 2014 and thought I’d only find the rest at auction, until now.

Things didn’t start well for me using M&M. I was over-the-moon to discover that the 1998 Miltonduff had been replaced by a Highland Park 20cl (one of my favourite whiskies) so I added 2 bottles to my basket. It took 5 days for someone at M&M to reply to me to say the HP was out of stock. 5 days! And their website shows 4 people working in sales so it’s not like they’re short staffed. They asked if I wanted a replacement or a refund so I asked for a Macduff and a Glen Grant. They were slightly more expensive than the HP but, since they were my 2nd choice, it was only fair that M&M agreed to supply them at a lower price.

84/100 on Whiskybase is a very good score. One reviewer says of the taste “malty. Not as fruity as on the nose. Instead more delicate and gentle oakiness developing into more bitterness. Later on cinnamon and ginger. Also nutiness” and summarises with “not as stunning as those 2000 sherry matured Macduff. The nose is light and clean, the palate more heavy and complex.”

Although I already have an example from the Macduff distillery, everywhere I look I’ve seen the Glen Deveron 10yo, so I decided to add it to my collection. Apparently ‘Glen Deveron’ was the original name of the founding company of Macduff distillery when it opened in 1962 but it’s changed its name back and forth a few times since then. According to reviewers on Malt Maniacs, the quality of the Glen Deveron 10yo goes back and forth too, depending on the year of release. This is backed up by Jim Murray’s Whisky Bible. In 2006 he rates this 10yo at 72/100, in 2009 he gives it 83/100 and then in 2013 it’s reached the lofty heights of 86/100. Apparently he would give it over 90/100 if they made it 46% and removed the use of caramel. Macduff take note! 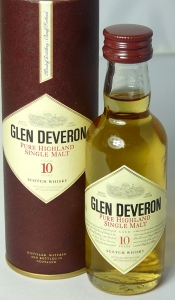 This is my 11th and final bottle I’ll be getting from the Carn Mor collection. I was never intending to get all 24. The bottles I have give me a good range of ages and distilleries. The main reason for buying them was to further my collection of distillery examples at the best price possible. 20cl bottles are very handy because they’re a lot cheaper than full bottles and last longer than miniatures. My only complaint is that these quarter bottles seem hard to find. More distilleries should be doing them in my opinion.

This wont be my final bottle from Macduff. The distillery’s flagship malt is the Glen Deveron and the 10yo gets 86/100 in the Whisky Bible 2013. The review goes on to say that it would score in the low 90s if it was 46% and lost the addition of caramel. Perhaps if it ever does that’s the day I’ll buy a bottle. It’s on my wishlist for the future!