I considered getting the Knockando 12yo last Christmas but I got put off by the variable ratings this annual release gets. The most recent 12yo mentioned in the Whisky Bible is the 1996 version where the first word of the review is “disappointing”. Hardly an encouraging comment! I ended up ticking Knockando off my Scottish distillery wishlist when I bought a 1986 miniature in an online auction last February.

So why buy it now? Because this is the 1999 release, and therefore the final version of this 12yo to be distilled in the last millennium. I’m probably the only person that thinks this is significant, and I doubt it will make this bottling a collector’s item. Certainly not when the only review in English on Whiskybase summarises with “This is not better than a blend. Only winning feature was that it’s a bit above 40% (at 43%).” Ouch! When the best thing about a spirit is its strength so you can get drunk faster and ignore its taste, you know it’s not a lifelong friend.

I’m wondering if the distillery got its name when someone asked “can you make a good single malt?” and the reply was “no can do!” 🙂 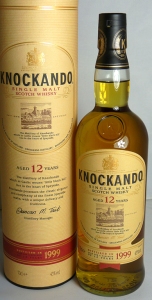 Last year I was all set to buy the latest version of the Knockando 12-year-old from Waitrose for £28 when I read Jim Murray’s review in his Whisky Bible. Scoring 76/100 his first word was “disappointing”. The 12-year-old distilled 2 years earlier got 86/100. I don’t know about you but when I’m clutching £28 in my hand, all set to buy something, and I hear it’s “disappointing” I decided to put my money elsewhere.

It was when I started following whisky auctions that I noticed lots of old Knockando bottings with dates on them – 1974, 1975, 1976, etc., available in both 70cl and miniature form. How interesting! According to my book on distilleries, Knockando started these ‘annual’ bottlings in the 1970s, mentioning the year of distillation rather than a specific age statement.

When I bought this miniature 1986 there were several other Knockando dated whiskies on offer. 1973, 1974, 1977, 1978 and 1980 to name but 5. I have to wonder if the idea behind doing this was for collecting. I can imagine getting bottles from several different years and wanting to find the ones I’m missing. I must resist! Thankfully I think I can. I’ll save my pennies until the 70cl 12yo gets a decent review again.