I hadn’t intended to get the Glenallachie 12yo until I found myself putting in a whisky order and realising it was available as a miniature. Ralfy on his famous YouTube channel had named it his whisky of 2019 in January of said year based on his 2018 bottling. It’s curious that this version only scored 83.82/100 on Whiskybase but since Ralfy’s review the 2019 release is over 85/100. I strongly suspect some ratings have been influenced by the great man. Hardly surprising since he now has over 125,000 subscribers.

The Glenallachie ‘Distillery Edition’, which came out in UK supermarkets in 2017, seems like a long time ago now. The styling was boring and uninspired but initial reviews suggested the whisky inside had potential. The change in presentation in 2018 was very impressive, which included a good range of aged whiskies. I’ve frequently found myself hovering over the “buy now” button for the Glenallachie 10yo cask strength, which at c.£55 isn’t a bank breaker for such an excellent dram. One day!

As for my 12yo the score on Whiskybase along with Ralfy’s thoughts suggest a very rewarding single malt. Comments include “there are no shortcuts to quality, and this malt is ticking all the boxes”, “for me the best product of the new range”, “beautiful intensive sweet and fruity malt with interesting aromas and a nice nose” and “honest and decent whisky”. What more can you ask for? 70cl instead of 5cl perhaps?

Here’s Ralfy with his thoughts about the Glenallachie 12yo on YouTube (Jan 2019). Another YouTuber, ‘Whisky In The 6’ even made a 1-hour video about this dram where he includes in the title “why Ralfy was right”.

You can tell that the whisky industry is booming when distilleries primarily used for blending start producing single malts. We had the Tamnavulin ‘Double Cask’ last year and now the Glenallachie ‘Distillery Edition’. Both appeared in UK supermarkets and were instantly discounted from their RRP of £32 (which they’re not worth) to the low £20s. Both are NAS (no-age statement) but in fairness to the Glenallachie it’s doing better than the Tamnavulin with regards to reviews. 82.33/100 on Whiskybase is an extremely good mark, albeit from only 3 votes so far.

The ‘Distillery Edition’ is doing equally well over on Master of Malt with 4.5/5 stars from 2 votes. Comments include “definitely found my new dram” and “the nose for me is a spirity flapjack, a palate of spicy apples with a warm long lasting finish. A smooth tasting treat!”

Nose: Caramel-dipped apples and pears, with hints of brown sugar and digestive biscuits.
Palate: Oodles of vanilla, with a zesty kick of fresh citrus at the centre.
Finish: Fruity esters last long on the finish.

There are no specific YouTube reviews yet for the Glenallachie ‘Distillery Edition’ but here is Ben of ‘A Dram A Day’ covering the distillery’s history before reviewing another example of Glenallachie single malt:

This Glenallachie is part of the 24 x 20cl bottles that make up the Carn Mor Vintage Collection. Distilled in 1992 and bottled in 2009, it’s from a limited edition of 953, Cask No: 587. Non-chill filtered,  no added colour and 46%, so the makings of something very delightful! 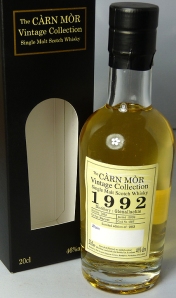