This new 8-year-old Bruichladdich first appeared as a Travel Retail Exclusive in March 2016 for £44.99. It then went up to £46.49 and by September it was £48.99. Ah yes, the slow creep of the greedy world of whisky. Nevertheless I was so excited to find a new ‘age statement’ from Bruichladdich I decided that nearly £50 was worth it. Hard to believe it’s only 3 years since I paid £20 for a bottle of the dearly departed Laddie 10. But obviously my salary has gone up by 150% since 2013 so I’m able to keep buying whisky! 🙂

83.6/100 on Whiskybase is a very good score and compares well against the Classic Laddie Scotch Barley NAS (non-age statement) with 82.3/100. Comments for the Laddie 8 include “satisfying and with its own distinguishable signature” and “a light, easy-sipping dram at first glance, but it pays off to take your time and dig deeper.” A Whiskybase member scoring the Laddie 8 a representative 84/100 leaves these tasting notes:

Nose: Very fresh and light with lemon curd, lime and kiwi at centre stage. Also grass, honey and vanilla with sweet breakfast cereals.
Taste: Fairly spicy at first, but those quickly make way for fruitier flavours of lemon, apple and pear. Some nuttiness in the background as well.
Finish: Subtle aniseed, lemon rasp and almonds. Drying and pretty long.

This 20cl version of the Classic Laddie was an impulse buy because you can’t go wrong with Bruichladdich – or can you? Jim Murray in his Whisky Bible isn’t impressed and 78.5/100 classifying this dram as “average and usually pleasant though sometimes flawed”. 83.41/100 on Whiskybase might seem good but those members that leave comments have scores ranging from 70/100 to 85/100 so it seems it’s not to everyone’s taste. At least the Whisky Bitch likes it so it has one fan and counting.

Jim Murray says “despite some obviously complex and promising moves, the usual infiltration of sub-standard casks has undone the good of the local barley.” And summarises with “if you manage to tune out the off-notes, some sublime moments can still be had.”

There are no comments in English on Whiskybase but a member from the Czech Republic says (translated) “very tough and sharp” and “when compared with Port Charlotte this is a flop”. The 70cl version scores slightly less than the 20cl with 82.71/100 and again none of the comments are in English. Perhaps this bottling was mostly for the mainland Europe market. Nevertheless, 83.4/100 is a very good mark so clearly a lot of silent Whiskybase voters like it.

Jim Murray in his Whisky Bible absolutely loves this whisky. 94.5/100 classifies it as a “superstar whisky that gives us all a reason to live”. He says about the taste “a youthful livewire delivery with a pretty surprising degree of maple syrup and treacle latching onto the phenols: the effect and balance is wonderful; pay attention and you’ll spot some juicy fruit notes popping up here and there, too” and summarises with “rearrange the following two words: “giant” and “gentle”.”

Nearly 85/100 on Whiskybase is an excellent mark. It’s clearly a lovely dram. Here’s Jo of ‘Whisky Wednesday’ with his review from October 2014:

I decided to get this version of Bruichladdich ‘Octomore’ because of its limited edition status. The two versions of the 6.1 in the Whisky Bible score higher with marks of 91.5/100 and 94/100 but 90/100 still classifies my bottle as ‘brilliant’. The fact that it comes from a cognac cask is a new one to me. Jim Murray the Bible author says of the taste “hard to imagine the smoke playing second fiddle, but it does: the sugars are so intense and the barley so salivating, for a few moments you even forget it is there.” He summarises with “one of the sweetest bottlings from this distillery of all time. Some warming late spice, too.”

Scoring over 85/100 on Whiskybase is an excellent rating although the 6.1 version gets nearly 87/100 and 6.3 is up at a heady 88/100. Nevertheless, comments for the 6.2 include “here’s one expression I hope is around forever as it’s a drinking phenomena”, “again a masterpiece. Heavy peat and sea, mixed with fruits and honey beyond the fire.” and “what’s the deal with the low rating in comparison to other Octomore bottlings? I really don’t see much different. If any I liked this one more than previous bottlings.”

Will it be a good investment? It’s hard to say with the Octomore. With so many versions coming out, even a limited edition is swamped by what’s available. I’m tempted to try it but perhaps at a tasting event, or by getting a 5cl sample rather than cracking open my bottle. At the speed I drink, it would be around for a very long time!

‘The Laddie Ten’ should act as a lesson to distilleries that continue to add colouring to their malts. Proudly boasted on the side of the Laddie bottle (and tin) confirms it has ‘no added colour’ and is ‘non-chill filtered’. Then you look at the colour of it and think “blimey, did they forget to take some of the sherry out of the casks?!” But the depth in colour is all part of the reassurance that you’re getting the real deal. This isn’t white spirit were a chemist from the Dulux paint factory picking out an appropriate ‘whisky’ colour to inject into it. The Laddie’s colour is part of the traditional process that makes the best Scotch whiskies the pride of the nation. Now I step off my soap box and say that I mainly bought this Bruichladdich offering because ASDA reduced it from £36 to £20. So far it’s been the bargain of the year! 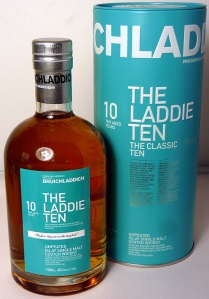