I feel a bit unfair mentioning Jim Murray’s rating from his 2006 bible but that’s the furthest back I can go for a review. My mini bottle is a bit older than that, and is 43% volume rather than the 40% bottle Jim discusses. I believe my bottle is from the 1980s, as I found a similar version from that era on a website called ‘Whisky Vault’ at the same 43% strength.

Lang Brothers Ltd owned the Glengoyne distillery but in 2003 both the distillery and rights to the Langs blends were acquired by Ian Macleod Distillers Ltd. Jim Murray’s 2006 review will be based on bottles blended under new management but they probably still include some Glengoyne malt. I will try and spot this during the tasting. 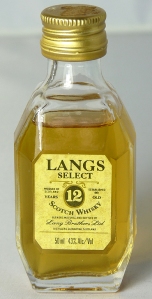