Bladnoch distillery celebrated its 200th anniversary in 2017 and the new owner (David Prior) decided to release 3 commemorative bottles, the Samsara (NAS), Adela 15yo and Talia 25yo. Unfortunately they weren’t new because they’d already been released in 2016. The only clear difference I can see is that the re-release in 2017 now had “Celebrating 200 years” at the bottom of the bottle label. I gave my wife a food blender for our 24th wedding anniversary last year and I gave her the same blender this year with “happy 25th anniversary!” on it. I’m now single. I jest of course. 🙂

It was mostly this lazy attempt to celebrate Bladnoch’s 200th birthday that caused me to delay getting the Samsara. Not that it was likely to sell out because demand for the distillery seems quite low. Although the Samsara is NAS (non-age statement) it’s said to be over 8-years-old as the last spirit distilled at the distillery was in 2008. The 2016 release scored 79/100 on Whiskybase from 30 member votes so 82.7/100 for the 2017 is a clear improvement. Although both are 46.7% (a good strength) the 2017 version is matured in Californian red wine and bourbon casks. Maturation isn’t mentioned for the 2016 edition, so perhaps there’s a difference there. If nothing else the Samsara 2017 could have 9-year-old whisky as a base instead of the 8-year-old for the 2016 release.

So why did I get the Samsara? Having bought bottles to celebrate 200 years of Lagavulin and Laphroaig it didn’t seem right not to support Bladnoch and its ‘rebirth’ (the meaning of the word ‘Samsara’). Not only that but reviews have improved for the Samsara and for just over £60 this 8yo+ comes in a beautiful decanter-style bottle and sturdy display box. Both reviews left on Master of Malt consider the Samsara to be good value for money although I notice the price has increased to over £70. Tut tut!

Nose: Quite concentrated, fruit compote, with plums, vanilla and orange blossom.
Palate: A sweet winey start, then drying slightly before more plums and vanilla flavours, some citrus and a malty core. Nicely structured.
Finish: Mellow and winey with a spicy, lingering tail.

Here’s Horst Luening of Whisky.com with his thoughts on YouTube (July 2017): 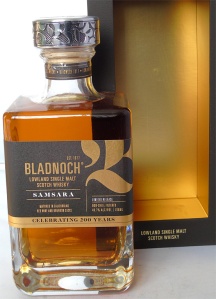