Rugby – something Scotland used to be good at. It’s sad that there are young Scottish adults walking the earth today that weren’t born when Scotland was a proud rugby country. Scotland haven’t won the Nations Championship since 1999, the year before Italy were asked to join to make it the ‘6 Nations Championship’ that we have today. Perhaps the Scots are allergic to Italians? The ‘Grand Slam’ is where a team manages to win the championship by beating all the other teams. The last time Scotland achieved this was in 1990, finishing on the 17th March with a 13-7 win against England at Murrayfield in Edinburgh. I watched it on TV and enjoyed every minute of it, except the England try, which was definitely offside!

After the dust had settled in 1990 Glenmorangie decided to release a commemorative version of their standard 10yo. On the reverse label it includes the signatures of the victorious Scottish team. Scoring just over 81/100 on Whiskybase is what you’d expect for a 10-year-old Glenmorangie from that period. Personally I’d rate it higher at about 85/100 but then I am a big fan of the Glenmorangie 10yo from the early to mid 90s, even though it’s 40% rather than the 43% of the modern incarnation.

I rarely give investment tips but here’s one for the ‘Grand Slam Dram’. As far as I can tell the bottle wasn’t originally sold with any packaging. The majority of bottles sold at auction come without any and typically make about £80. I noticed that some cunning person had paired their ‘Grand Slam Dram’ bottle with a tube from roughly the right period, which sold for £160. It goes to show that people are prepared to pay extra for packaging (weird – I know!). I bought my bottle for £80 and picked up an empty tin from the early 1990s from Ebay for £5. I can’t guarantee I’ll double my money if I ever sell it because auctions can be fickle but I’ll definitely make a profit on the tin.

Here’s a 15-minute documentary from 2010 to mark 20 years since the final Grand Slam match between Scotland and England, Murrayfield, 17th March 1990: 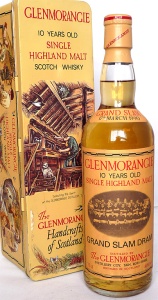