The scores grow with the age of the Ardbeg on Whiskybase (much as you’d expect) but Jim Murray feels the Renaissance loses a point to the younger 9yo and 8yo. He remarks about the ‘Almost There’ with “further proof that a whisky doesn’t have to reach double figures in age to enter the realms of brilliance”. Nevertheless the scores for all 4 bottlings are excellent and scoring over 86/100 on Whiskybase is a fantastic mark.

Now I have the ‘Almost There’ will I get the other 3 bottles in the series? Probably not, mostly because the ‘Very Young’ goes for £250+ at auction. As much as I love collecting whisky my spending has limits. I enjoy drinking Ardbeg and the standard 10yo (£40) scores 86.5/100 on Whiskybase, which is nearly 2 points more than the ‘Very Young’. But there’s no denying that bottles such as the ‘Almost There’ are a good investment if the worldwide interest in whisky continues to grow. 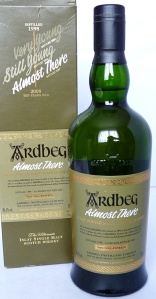 This entry was posted in Ardbeg and tagged 54.1%, 70cl, 9yo, Almost There, Ardbeg, Islay, Online Whisky Auction, Single Malt. Bookmark the permalink.