The ‘ONE’ by The Lakes Distillery

Well that’s embarrassing. I bought this bottle in an Amazon ‘Lightening Deal’ 7 months ago and forgot to add it to my list. I have to thank Ben of ‘A Dram A Day’ for doing a video about it (see below), which reminded me I had the ‘ONE’ and made me realise it was missing from this blog. Oooop!

The ‘ONE’ is a blend (or vatting – see later) by the new Lakes Distillery, opened in 2014, which they’re selling whilst waiting for their single malt to be ready. The blend is made up of whiskies from Scotland, England, Wales and Ireland. Whisky Bible author Jim Murray quite likes it. 84.5/100 classifies the ‘ONE’ as ‘good whisky worth trying’ but you wouldn’t think so from his review. After an interesting nose he says about the taste “on the palate is a disappointment, with any complexity desired submerged under a welter of dull caramels. Just too flat and soft for its own good.”

Curiously, experienced whisky taster and reviewer Mark Dermul has the exact opposite to say about the ‘ONE’. On Whiskybase he remarks “the nose did not amount to much, but I quite like it on the palate.” Although he does think it tastes rather watery but is convinced there is some Islay whisky in there (in a good way).

Although the ‘ONE’ is described as a blend, Jim Murray believes it’s a vatted malt, so a blend of single malts. On the other hand Ben of ‘A Dram A Day’ believes there could be as much as 60% grain. One thing that’s apparent is there has been more than one version of the ‘ONE’. Whiskybase reviewer ‘jazzpianofingers’ has commented about two versions and says of the second “really coming along nicely. Improvement on the last batch, far more consistency and clarity with a firm direction”. 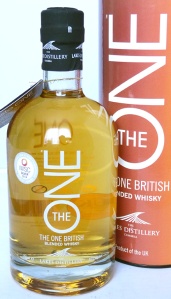 This entry was posted in The Lakes Distillery (England) and tagged 40%, 70cl, Amazon, Blend, Cumbria, England, NAS, The Lake Distillery, The ONE, Vatted Malt. Bookmark the permalink.