Where did this Highland Park come from? Before you say “a mummy whisky and a daddy whisky” I’ll rephrase my question – I thought the main ‘Travel Retail’ dates for Highland Park had been 1990, 1994, 1998 and 2001? It would make sense since they’re nicely spaced. A 1997 seems a bit out of place. I’ve checked through the HP bottles listed on Whiskybase and I think this is the only ‘Travel Retail’ year version I missed but I’m not sure it was ever available in the UK. The reason I say this is because it rarely, if ever, appears in a British auction even though it was bottled in 2009. When I spotted it, trying to find previously sold versions was practically impossible.

81.3/100 on Whiskybase is a reasonable score but falls short of being amazing. Experienced reviewer Mark Dermul leaves us his thoughts about the taste “good start on the palate, slightly bitter but certainly not oaky, with loads of oranges, but also figs. The Orkney peaty is very prominent now. Caramel and some coconut.” He summarises with “this is pretty good stuff and a whole other story than the standard 12 Year Old.” Mark lives in Belgium and his review is from a few years ago when he ends with “last seen for around €45.” I doubt it was ever seen in UK airports for the GBP equivalent (about £35), which is why I think it’s so rare on these shores. It’s certainly a curiosity for a British collector of HP and it’s nice to know it’s a different experience to the standard 12yo. 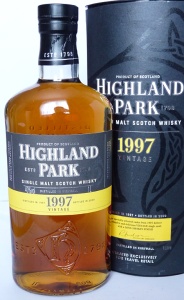