Longrow is the name given to one of the three single malt variants produced by the Campbeltown distillery Springbank. On the distillery website they say, and I quote “first distilled in 1973, Longrow is the result of an experiment carried out by our chairman, who set out to prove that an Islay style single malt could be produced on the mainland. Today, our heavily peated, wonderfully smoky whisky is available in three bottlings – Peated, Red and 18yo.”

A favourite dram of mine is the Springbank 10yo and I love Islay whisky so it’s a mystery to me that I’ve never tried a Longrow. Why?! Simple because there are so many whiskies to choose from but I will have to make an exception for Longrow and try it soon. It sounds like it has the makings of something quite special. Voters on Whiskybase and Malt Maniacs clearly think this particular example is an excellent one.

My miniature of Longrow by Signatory was in an auction with 4 other miniatures but I did my research and discovered an identical bottle had sold on its own for £7.25 in May 2015. Incredibly another bottle had sold for a staggering £39.50 in February 2014. It goes to show that not every whisky has been shooting up in value in the last few years. Some may have already peaked. In the current market I doubt this miniature would be worth more than £10 but it only takes two Longrow lovers at an auction to send the price sky-high. 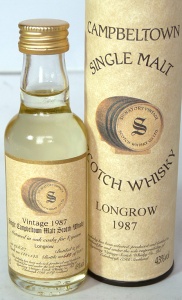