This is my 3rd bottle of Kininvie and most definitely my last. I might be a crazy whisky collector but the latest Kininvie 25yo for £400 is bonkers when you consider it’s only 35cl. Even if it were 70cl it would be competing against the likes of the Highland Park 30yo and Kininvie isn’t in the same league as the Orkney giant. The novelty of these ‘rare’ Kininvie bottlings has worn off for me and if they keep churning out the releases it wont make much of an investment either!

As I did a bit more research into Kininvie I discovered that the Wikipedia entry about the distillery is several years out of date. Only the single malts named ‘Hazelwood’ are mentioned (a 15 and 17-year-old). There is no mention of the 6 single malts released with the Kininvie name, 3 batches of a 23-year-old and 1 batch of a 17-year-old. Whiskybase mention 2 batches of the latest 25-year-old. What’s also strange is the absence of the distillery in Jim Murray’s Whisky Bible. Perhaps he couldn’t afford a sample?!

84.29/100 on Whiskybase is a very good mark for my latest Kininvie 23yo. One reviewer summarises with “the combination of bourbon and sherry casks along with the 23 year maturation generates a wonderful balanced malt with lots of depth and richness. Dried fruit, zesty orange, flower meadow and quite a hot mix of spices compose this luxurious whisky, which definitely has a fair amount of American oak maturation.”

A good whisky that’s overpriced and half the quantity it should be. 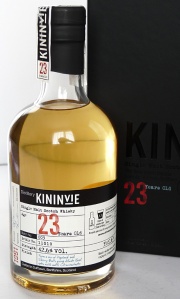 This entry was posted in Kininvie and tagged 1991, 23yo, 35cl, 42.6%, Batch 3, Kininvie, Monkey Shoulder, Single Malt, Speyside, The Whisky Shop. Bookmark the permalink.