I love Signatory’s ‘Vintage Cask Strength Collection’ and I collect Highland Park so I pounced on this bottling when it first appeared. Much to my surprise it took a few months to sell out. £90 might seem a lot for a 15-year-old until you consider that a) Highland Park is very collectable b) it’s cask strength and c) the standard 15-year-old direct from the distillery is £65 (and only 40%).

When I tried the Gordon & MacPhail cask strength Highland Park last year I was a bit disappointed. But I’m hoping the missing element was maturity, which this Signatory bottling has. With only 196 bottles produced it’s nice to see that two of them have been rated on Whiskybase and 87/100 is a very high score. One member comments “good and even better with water. A really nice Highland Park.” And leaves the following tasting notes: 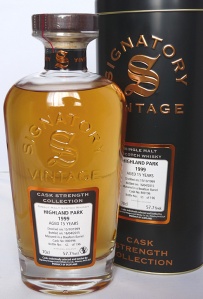