In 2013 I started and finished a collection to get a single malt example from every active distillery in Scotland. I succeeded but, unbeknown to me, Kininvie distillery released its first single malt to the Asian market towards the end of 2013. With the distillery beginning life in 1990, this was a 23-year-old bottling, batch 1, distilled in that embryonic year. In 2014 a 17-year-old version was released, exclusive to Travel Retail, and was finally available in the UK. This is where it gets embarrassing. I could have bought a bottle of this Kininvie 17yo at Aberdeen airport in October for £70 but I decided it was too much for a mere 35cl. Two days later I saw exactly the same bottle sell at auction for £170! I knew it would become a collector’s item but I had no idea it would be more than double its RRP at auction before it had sold out in airports!

I was surprised that Kininvie wasn’t in the Whisky Bible 2015, given that the first batch of the 23-year-old came out in 2013. Perhaps the distillery didn’t send the author a sample to try. The good news is that the members of Whiskybase certainly like it. Over 84/100 is an excellent mark from 20 members. So it’s a collector’s item AND it tastes nice. Sounds like a win/win to me!

Here’s Jo of Whisky Wednesday with his You Tube review (April 2015): 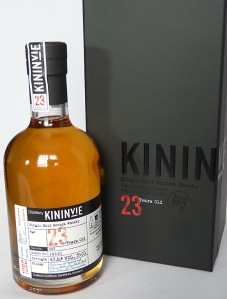 This entry was posted in Kininvie and tagged 23yo, 35cl, 42.6%, Kininvie, Monkey Shoulder, Single Malt, Speyside, The Whisky Shop. Bookmark the permalink.