Never let it be said that I only buy whisky because Jim Murray (author of the Whisky Bible) gives it a good rating. His mark of 68.5/100 is one of the worst I’ve seen and classifies this whisky as “very unimpressive indeed”. All he says is “the sherry problem has increased dramatically rather than being solved”. If anything this negative score made me curious. Could I spot the problem, or would I disagree completely? It was only when Morrisons reduced the Lasanta to £25 that I was tempted to find out.

It’s not as if the Lasanta doesn’t have fans. 11 reviewers on Malt Maniacs give it an average score of 81/100, which is very good. It receives comments of “nice and balanced. No disturbing notes anywhere” and “a reasonable dram”. With such mixed opinions, I was wondering what I’d make of this malt.

Now for the tasting – sadly the Lasanta just doesn’t work for me. The maturation for 10 years in bourbon casks clashes in a very unharmonious way with the final 2 years in sherry casks. It’s like two badly matched whiskies have been blended together. There was also a slight fusty smell but the 46% helped give it a good finish. But I haven’t written this whisky off completely. I’ll allow it to settle in the open bottle for a month or two and revisit it. Obviously it has finished maturing but often a whisky will smooth out if left in an open bottle for a while. The Lasanta has the sort of rough notes where I feel it will improve over time.

Update (Feb 2015). Added Ralfy’s review, which is very interesting, and he gives this single malt an excellent mark. I had another dram of the Lasanta last night and it’s growing on me. The time it’s had to breath in the bottle has certainly helped, and it does open up well in the glass. It’s still not my favourite by a long way, so I probably wont be getting another bottle once it’s finished. 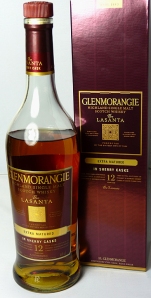 This entry was posted in Glenmorangie and tagged 12yo, 46%, 70cl, Glenmorangie, Highland, Highlands, Lasanta, Morrisons, Single Malt. Bookmark the permalink.