Apparently Alfred Dunhill Ltd got into selling whisky in 1982, so this bottle isn’t any older than that. The bottle design is quite interesting and it’s a replica of a Victorian design from 1845. It’s certainly very distinctive. Malts in the mix are said to be between 8 and 20 years old. When hunting for this blend on Google the first link I found was for a big bottle on ‘Master of Malt’ that they once sold for £250. It’s now flagged as ‘discontinued’. But I also found two big bottles that sold at auction in 2012 at £20 each. That’s more like it for a blend, even if this was considered a luxury version. ‘Hard To Find Whisky’ are trying to sell a bottle for £250 which is madness. My miniature has a price label on it, presumably from the first shop it was bought from, for £4.95, It cost about £2 at auction. 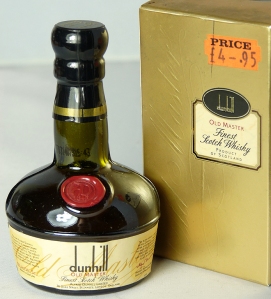