The ‘Dimple’ is a must-have whisky for any collector, which is why I’ve had it on my wishlist for some time. I was tempted to buy a new bottle from my local Wine Rack but, at £36.99, it was a lot of money for a blend and when compared to better whiskies at the same price or less. So, when I saw this miniature in an auction, I couldn’t resist getting it for a couple of pounds.

The ‘Dimple’ was first produced in the 1890s by John Haig & Co Ltd. There is no shortage of full-sized vintage bottles selling in auction for £20 or less, which is why the new price seems so ridiculous! But with a cute name and a unique bottle shape, it’s a lovely whisky to have. For the latest version the Whisky Bible 2014 give it 87.5/100, so it’s improved a lot since 2006. I’ve included this older score for reference, even though my miniature might well be from the 1980s or even 1970s.

Here’s Frozen Summers with his review on You Tube (August 2014): 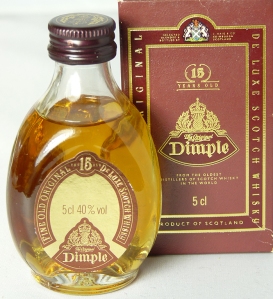 This entry was posted in Dimple and tagged 15yo, 40%, 5cl, Blend, Dimple, Haig, Online Whisky Auction. Bookmark the permalink.