As Ralfy says “arguably the best of the entire Johnnie Walker range” and it’s his personal Johnnie Walker favourite. Well worth watching his review. It was recorded back in 2010 when Green Label was easy to come by but it has now been discontinued (apparently). There’s several comments about this below the video with Ralfy saying 2 months ago that the Green Label is only available in Taiwan. He goes on to say “now last-stock (I’m told) on shop shelves, a proper collectable!”

The only local source I could find for the Green Label was ASDA. Links I found online often lead to whisky shops saying it was “no longer in stock”. One link showed an old price of £40 but when I clicked through to the shop the latest price was £50! Thankfully it was nearly half that in ASDA. It’s tempting not to drink it and put it away for a decade or two and then see how much it’s worth. But I haven’t tasted it yet, so scrub that idea!

Another confirmation about the demise of the Green Label is its omission from the Whisky Bible 2013. In the 2010 and 2012 editions it was awarded ‘Scotch Vatted Malt Of The Year’ with 95/100. It seems a shame that such a good whisky is to become a thing of the past. 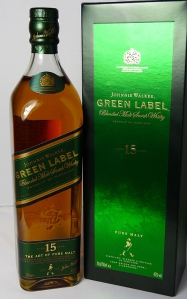