I’ve seen the Ardmore ‘Traditional Cask’ teasing me on the shelves of several local supermarkets since I started my whisky collection a few months ago. Ardmore is one of the closest distilleries to my home town of Aberdeen, so I eventually had to buy it. ASDA won me over with a tempting discount. I’ve seen Ardmore being classed as a Speyside distillery because of its location but it proudly says “Highland” on the bottle. Situated just south of Huntly, I’ll have to pay the distillery a visit sometime. I believe it’s possible by prior arrangement.

The cardboard tube that contains the bottle proudly says “non-chill filtered, 46%” which is pleasing to see. The only negative, which both Jim Murray and Luke Rymarz pick up on, is the lurking existence of caramel. Jim even says in his review that he was asked by the people at Ardmore what he’d suggest to help improve the flavour and he said to cut out the caramel. Sadly they didn’t listen. Nevertheless he still rates the distillery in his top 10 and enjoys the dram from this fine Ardmore example.

The Ardmore distillery provides whisky for use in the production of the Teacher’s blend. 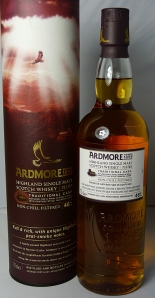