Buying this was a bit of a knee-jerk reaction. I’d been reading online that Macallan were discontinuing the younger age statements (10yo, 12yo and perhaps even the 15yo) of the ‘Sherry Oak’ and ‘Fine Oak’ range. A number of online shops had ‘discontinued’ beside these whiskies, which was quite a big clue. The only Macallan I could see in supermarkets was the new Gold NAS (no age statement) variety. It’s either too new for Jim Murray to have added it to his bible or he just couldn’t bring himself to drink it. Then, out of the blue, Morrisons had one solitary bottle of ‘Fine Oak’ 10yo, sitting in front of a big queue of unloved ‘Gold’. It had no price because it wasn’t meant to be there. Although the ‘Sherry Oak’ is considered better as a 10yo I thought “what the heck”, grabbed the bottle and bought it. I’m not sure if I’ll keep it as an investment but at 90/100 in the bible it shouldn’t be bad at warming the cockles during a few cold winter nights. No, hang on, I live in England now so we don’t get those! 😉 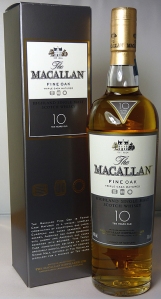 This entry was posted in Macallan and tagged 10yo, 40%, 70cl, Fine Oak, Macallan, Morrisons, Single Malt, Speyside. Bookmark the permalink.